DIY Survival Weapons for When SHTF 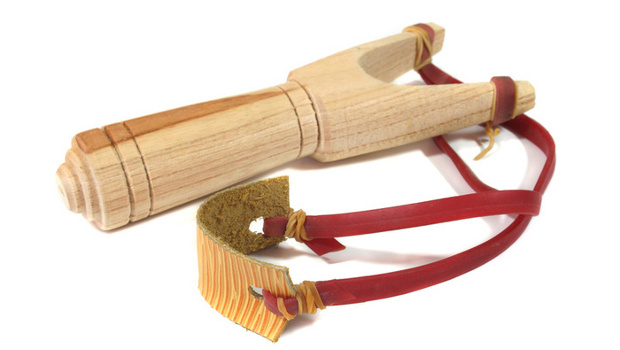 Learning how to create your own weapons using everyday materials is a handy skill that will serve you well in a crisis. There is no telling where you will be when SHTF, so getting to your home or emergency retreat safely is of paramount importance. As part of your disaster preparations, it is advisable to practice creating the following weapons until you can make them quickly and easily.

There are two main types of weapon. The first type are those intended for use in close combat situations; and the second type are those that can be used to defend your home or temporary shelter.

The paper brick was first used back in the 1960’s by English soccer hooligans who had to come up with new and ingenious ways to sneak weapons into stadiums. Known as the ‘Millwall Brick’, it was the weapon of choice of the notoriously violent fans of Millwall Football Club. Take several sheets of newspaper and stack them on top of one another.

Take one side of the newspaper, and fold over a section roughly 2 inches wide. Continue folding the section inwards until the entire newspaper has 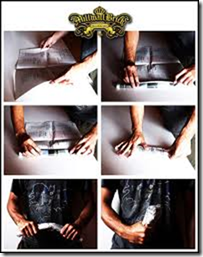 been folded into a roll. Bend the roll in half and secure the two ends with some strong tape or twine. The brick is designed to be used as a cosh or bludgeon, and you should grip the two ends with your fist so that the folded section is facings downwards. You can also drop coins or stones into the ends of the paper so that they fall down into the folded section to give extra weight.  www.millwallbrick.com

Make a Stone and Wood Club

Start by cutting a thick branch from a tree. Cut a section that is roughly 1 foot long and with a diameter of about 2 inches. It is essential to use fresh wood for this task as dried tree branches will crack when you try to split them.  Find a heavy, oval shaped rock that is a good size to fit onto your handle. Tie some rope tightly around the middle of your handle. Split one end of the handle down the middle into 2 halves, and insert your rock. Squeeze the two halves of the handle together to grip the rock in place. Tie more rope all around the rock and the handle as tightly as you can to secure it. 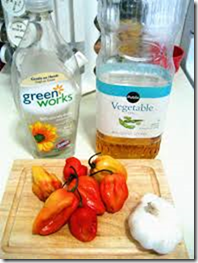 Pepper spray is the perfect non-lethal weapon that allows you render attackers helpless. You can increase the range of your pepper spray by placing it into a super soaker water pistol if there is one available.  If not, a simple spray bottle will work perfectly. In a glass jar or plastic bottle, combine chili powder (cayenne, red chili powder, chili flakes or ground black pepper are all ideal), two table spoons of oil and 14 ounces of alcohol, vinegar or water. Let the mixture sit in a cool place for as long as possible. Pour the mixture into your spray bottle and use as needed. You can make a more potent pepper spray using fresh, scotch bonnet chili peppers, but you will need to dry them using a dehydrator or natural sunlight, so this is best prepared well in advance. 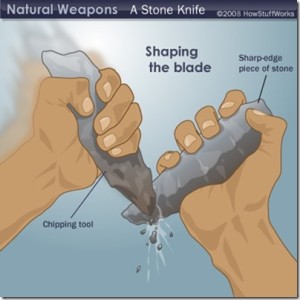 A knife is an essential tool that you will require for finding food, protection, construction and making other tools. Start by locating a rectangular-shaped rock that is relatively flat on one side.  This will eventually become your blade. Look for another heavier rock that has a rounded surface that will act as your hammer stone. Hold your blade with the flat side facing downwards and slightly towards you. Brace the rock on your thigh or hold it in mid-air. Begin striking the blade with the hammer stone in a downwards, fluid motion, and gradually chip away the edge of the blade until the flat edge becomes sharp. Only chip away at one side of the blade to retain its strength. Once the blade is almost ready, grind it against a boulder to smooth the edge and sharpen it. Wrap the bottom part of the knife with some rope, twine or heavy material to form a handle.

Weapons for Defending Your Territory 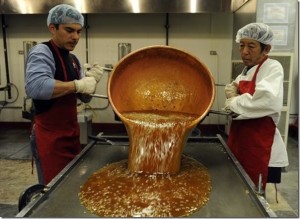 Napalm was characterized by its ability to stick to a person’s skin and continue burning away to inflict some of the most horrific injuries imaginable.

A simple, homemade version requires only two ingredients, sugar and water.  Use a ratio of one part sugar to one part water, and then mix together in a pot. Bring the mixture to a boil, and continue cooking for at least 10 minutes stirring continuously. The longer you cook the mixture, the thicker it will become. Any pastry chef can testify to the searing pain of hot syrup coming into contact with exposed skin. A large amount of this mixture is enough to stop any attacker dead in their tracks. 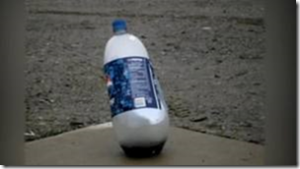 In order to deter any trespassers from your territory, you need a plastic bottle, aluminum foil and some form of toilet or drain cleaner that contains a good amount of hydrochloric acid.  Drain-O toilet bowel cleaner is perfect for this task. Tear the aluminum foil into pieces and roll them into balls small enough to fit in the neck of the bottle. Place 10 – 15 balls inside the bottle. Pour the hydrochloric acid into the bottle until it covers the aluminum foil. Shake the mixture thoroughly, and then immediately throw the bottle or set it down and take cover. It is difficult to judge exactly when the bottle will explode as the reaction could take between 10 seconds and one minute. This bomb is extremely loud and will cause chemical burns on anyone in close proximity. You can also use a glass jar for maximum damage as long as it has an airtight lid.