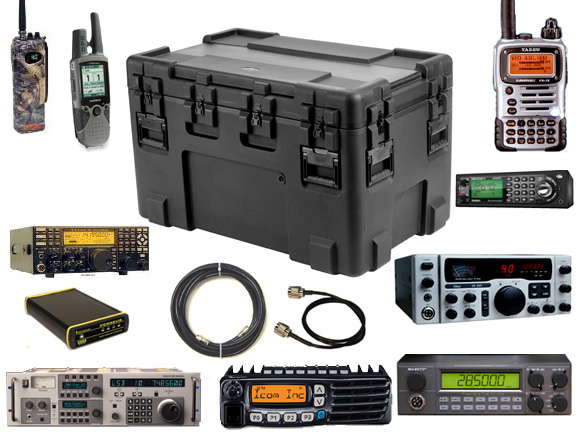 Will you be able to communicate in a SHTF situation?

It’s very important to maintain communication with your family or friends during a disaster as it is your only way of knowing what’s happening and what to do next in an emergency situation. That’s why survival radios are a top necessity when building your emergency survival kit.

You may be wondering why we should bother using a radio when we have easier ways of communicating nowadays by using our cell phones, laptops, etc; here’s why:

When power and commercial lines are down the only way to be able to connect to the outside world is by using radios as emergency communication equipment because they do not depend on AC power, satellites, or commercial lines to establish a signal for communication. These are the best survival radio choices that you can buy:

This is the top choice for emergency communication devices because it is the most powerful and versatile. With a million frequencies that you can use you will have a higher range of reaching out to send and receive information.

Using HAM radio repeaters will drastically maximize your radio’s band which is very useful during emergency situations as you will have the ability to reach out further and find someone you can communicate and exchange vital information with.

You have to keep in mind that when choosing a CB radio that all CB’s has a limit of 4 watts of transmission power only which will affect your effective range. But CB radio’s can peaked and tuned to increase its performance.

CB radios are only different on their features so if you’re planning to store a CB radio on your emergency kit it is best to understand its best features:

The function of this feature is to basically set the break-point at which a CB radio outputs a signal. It means that the radio will only activate the speaker when a clear transmission is received keeping the operator from listening to static.

This can be used to filter the type of transmission your CB radio receives basing on the strength of signal. This way you can eliminate background noise produced by weak signals due to faint transmission to get a better communication capability.

This allows CB radios to be used for public address system with the use of the radio itself and its microphone as a transmitter. By using a PA horn that you can be mounted on top of a vehicle this can be very useful in times of search and rescue during disasters or emergency.

This improves the reception or sound quality by filtering out static, engine noise, and other causes of interference giving you a higher chance of establishing a strong reception for communication.

Not all CB radios have this capability but the ones that have will have the ability to access local NOAA radio stations which could give you full updates and real-time weather information. This is very useful and important asset during emergency and disaster situations.

This CB feature will enable you to quickly switch to the two of the most popular chanel or frequency, that’s channel 9 (emergency) and channel 19 (highway/truckers) which is very helpful during emergency and disaster situation.

This is a great feature that will enable you to operate the radio at night or during dark conditions which is very convenient during disasters.

FRS radios or family radio service is a powerful but short-ranged service that you can use to communicate with your family within your house or camp site. This is a good option to add on your emergency survival kit because it is inexpensive and very easy to use which means that everyone in your group or family can use it. FRS radios can also communicate with GMRS (General mobile radio service) as they share some frequencies.

However FRS two-way radios have their limitations as well specially with its range. Although tests showed that FRS radios can reach a range of 22 to 36 miles this is only attainable during optimal conditions which is very difficult during disasters and emergency situations. So FRS radios are best used indoors or within your camp, it is still best to use more powerful radios like HAM to get more range and higher chance of outside communication.

A scanner radio is one of the must have radios in your emergency survival kit as it gives you the ability to listen to other radio transmissions in your area from different agencies like fire departments, police, ambulance services, government agencies, and air. Having a scanner radio during a disaster is one of the best ways to get in touch with the outside world so you may know how to appropriately respond to the situation and save your family.

Getting the best quality radio is important to ensure that your communication capabilities will be efficient during a disaster or emergency situation. These are our top picks for the best and affordable communication radios, we also included links to amazon in case you want to add these radios to your kit:

Having the right radio in store is a big factor in ensuring communication during a disaster. Choosing the radio to add in your emergency kit would basically depend on the specific use you have in mind. However making sure that you have the ability to communicate in a short as well as a longer range would ensure your family’s survival. Its best to get short range radios for family or group communications and have a long range radio to communicate with the outside world.