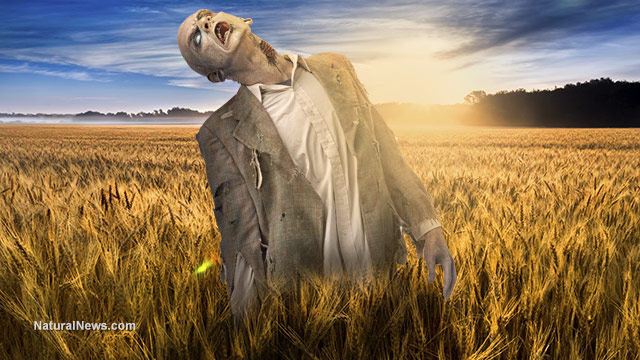 By: Team DIYSurvival Life
Kansas governor declares October Zombie Preparedness Month; urges citizens to prepare for zombie apocalypse
Although Kansas Governor Sam Brownback is sure to be teased about this by persnickety whiners, it’s actually a smart initiative: Kansas has declared October to be “Zombie Preparedness Month” in an effort to raise awareness about disaster preparedness among its citizens.

Obviously, the Kansas government isn’t literally concerned about the walking undead marching through the countryside, but the present-day popularity of the zombie theme provides a convenient hook to teach some truly lifesaving strategies. The idea is that if the population is well prepared against an imagined zombie attack, they’re probably also well prepared for an earthquake, nuclear terrorism, an Ebola outbreak or any other emergency that would seriously disrupt the fundamental infrastructure of society.

It’s a smart program. “The agency is calling on Kansans to devise a survival plan that they could implement in the unlikely event that a horde of zombies descends upon the Sunflower State,” reports the National Journal. [1] “Five of the best entries will be highlighted during ‘Zombie Preparedness Day’ on Oct. 25, an event that will take place in Topeka.”

No doubt the winning entries will likely be those which are the most politically correct — i.e. they won’t include instructions on how to build your own flamethrowers and zombie grenades — but even basic preparedness reminders can be extremely valuable to the public.

A covert way to educate people about preparedness

The “zombie” title is very clever because it allows the Kansas government to distribute lifesaving preparedness information under the cover of a caricature, cartoon-like theme story. If the same event were called “Ebola Preparedness Month” then it would be immediately deemed “too scary” by all the politically correct thought police who run around society making sure nobody confronts the truth about what’s really headed our way. But under the fictional theme of a zombie apocalypse, the government of Kansas can impart real, lifesaving information without making too many self-deluded people feel “uncomfortable.”

As an additional public relations benefit, people who are too uninformed and shortsighted to understand concepts like “personal preparedness” will simply think all the talk about zombies has something to do with Halloween. And they can take part, too, because zombie face masks and costumes are socially acceptable during the month of October (in America, anyway).

The real risks facing the people of Kansas — and every other U.S. state — include the risk of an EMP attack that destroys the national power grid, the arrival of a massive solar flare that destroys all modern electronics, a dirty bomb attack on a U.S. city, an Ebola outbreak reaching the continental United States, a cyber attack that brings down the banking system, a global debt collapse that shutters banks and halts financial transactions, a nuclear war with Russia or China, a catastrophic disruption in the national food supply, a nuclear plant meltdown and so on.

Fortunately, any preparations made in the context of a zombie apocalypse are extremely useful for any of those scenarios, too. All such preparations must include backup supplies of food, water, medicine, communications equipment and self defense gear which in Kansas would likely include appropriate rifles, shotguns and handguns.

Preparedness strategies for a full-blown viral pandemic are revealed in several articles on DIYSurvivalLife.

Kansas should be a model for the entire country

Personally, I’m really impressed with the effort being undertaken by Kansas and Gov. Sam Brownback. This effort is to be really commended, and it could save many lives. If the federal government modeled its preparedness advice after the Kansas program, the entire nation would be better off.

Kansas even has a readiness website called www.KSready.gov where you can learn all sorts of tips about being prepared for the unexpected.