What You Should Have in Your Every Day Carry

What’s in your Every Day Carry? 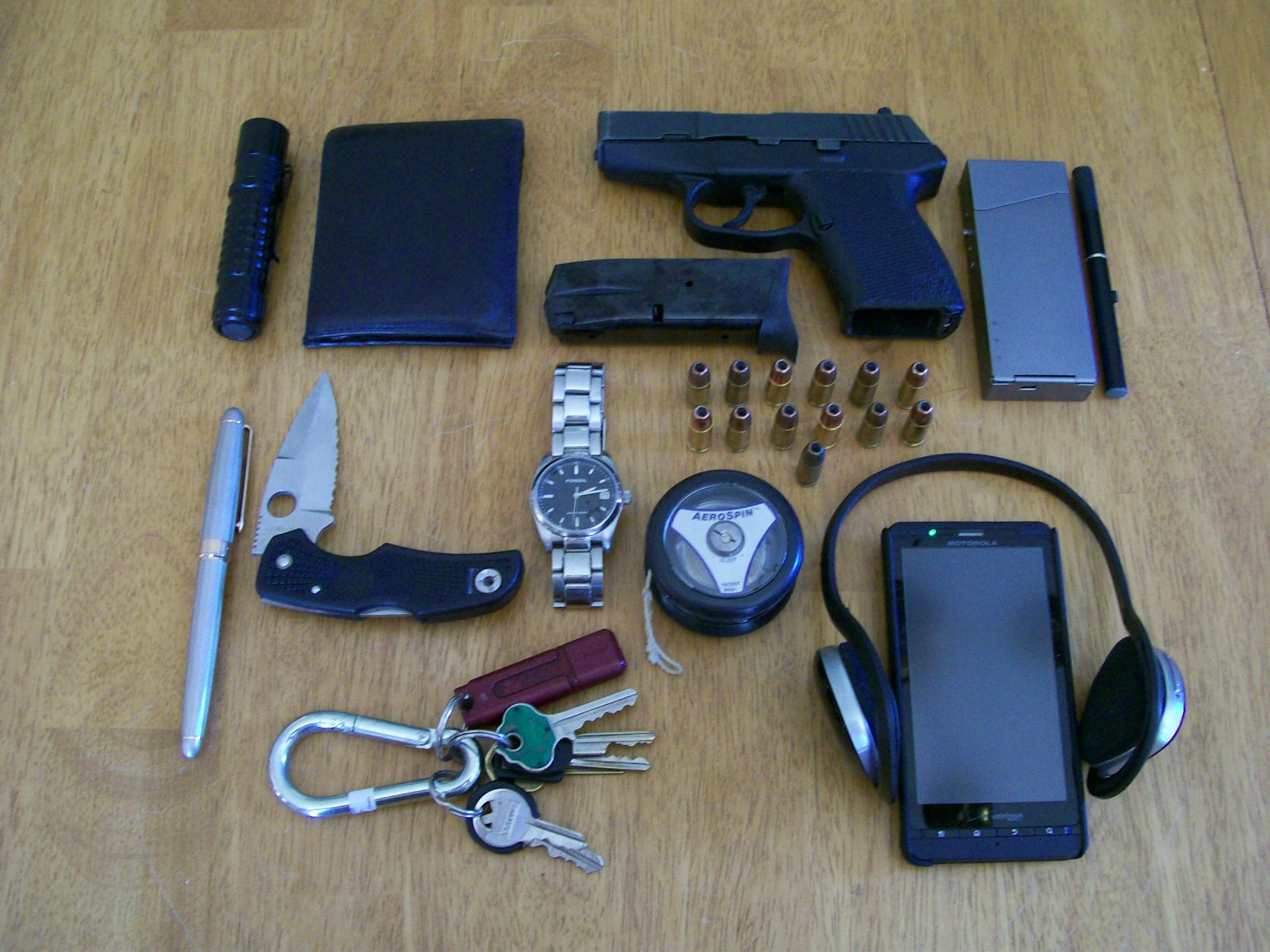 One of the topics of discussion with preppers has always been about what you should carry with you every day – in other words, your EDC gear. As I’ve said many times, the best gear in the world is useless if you don’t have it with you when you need it. For example, a $5 pocket knife is a much more effective weapon than an AK-47 in your gun safe at home. The problem is that you can’t carry everything, so you need to prioritize. This is a lot easier, and more difficult, than you may think.

There is a big difference between a bugout bag and an EDC kit. A bugout bag is something that you keep ready to grab, whether it’s in your house, car or office. The good thing about them is that you can carry quite a bit of stuff in them. The bad thing is that you have to remember to keep it nearby every time you leave, and you may get caught off guard without it some time. Your EDC gear is on you at all times. Pretty much no matter where I go, I always have it. That’s why things like a tent aren’t part of your EDC, unless you actually do wear a backpack at all times, which I don’t.

For my EDC gear, I have a core group of items that I carry pretty much every day, no matter where I’m going or what I’m gonna be doing. I also have a few extended EDC kits that I’ll tack on if I’m going to be going to certain places or wearing certain clothes. More on that later.

By the way, if you ever post pics of your EDC kit including your keys, you should cover up the keys. It’s possible to make a real copy of them from just a photo, so all someone would have to do is locate your home or car then and boom! there goes your playboy collection.

So what kinda stuff goes into an everyday carry kit?

Essentially, your EDC equipment is just a group of tools. The tools you need depend on the circumstances that you find yourself in and what problems you’re trying to solve. The key is to predict situations that you may find yourself in first, and then find tools that will solve the problem. My EDC gear changes as I find new things that I want to carry or change my pattern of life – as well as what outfit I’m wearing that day. Your EDC kit isn’t your bug out bag.

Convenient and useful items only

The key to the EDC part of it is that you need to find things that are compact and effective, or you won’t carry them every day. A good example of this is my flashlight. I have some great flashlights at home that I’ve either bought or received from the Army for deployments. The one I use by far the most though is my Fenix LD10. Why? because it fits into my pocket, and rarely am I wearing something that doesn’t have a pocket.

One of the reasons you’ll put something in your EDC gear is just out of pure convenience. I could easily pull out my iPhone if I wanted to check the time or maybe ask someone but it’s a lot easier to just glance down at my wrist. A watch has other uses as well but that’s a bonus.

Some items, like a leatherman, are really nice to have around when you’re trying to tinker under a car to get it running or find a loose bolt on your son’s bicycle (or in my case, his Harley). It’s just about convenience. This group is harder to decide because you only have so many pockets.

Things that you’ll hopefully never need to use but if you found yourself in a situation needing one, you won’t have the time or ability to go get one if it’s not on you.

My pistol is a great example of this category. I’ve known people who’ve found themselves in situations in their life that they’ve needed a weapon and were glad they had one. I’ve also seen many times where people could have at least had the choice to save their family or kids if they had a weapon available but they didn’t and it didn’t turn out so well. This happens in every decent-sized city pretty much every day to someone. Weapons certainly aren’t the only thing in this category but they’re certainly the most controversial. If you don’t have the training to carry a gun safely or live in a place where you’re more afraid of getting arrested for having it, you can always opt for a knife but you should really get some training on it.

If you’re the kind who’d rather call someone with a gun when you run into trouble instead of having one in case you need it, then just skip the pistol. Maybe keep a copy of How to Win Friends and Influence People on you so you can talk your way out of something.

Things you may want to carry in this category could be items to:

Unfortunately some locales don’t allow you to carry certain items so you’re gonna have to check into whether you can carry any particular item. Just remember that in a lot of cases, it’s the intent of what you’re planning on using something that may determine if you get charged so if you want to carry something, do some forward planning and find something that you intend to use it for that would make it legal.